Posted at 19:09h in Advertising, Careers, Commentary, HR by admin

To celebrate International Women’s Day, we sat down to interview two of our favorite women: and two of Q’s three partners: president, Linda Schuster, and vice president, Patty Marguet. 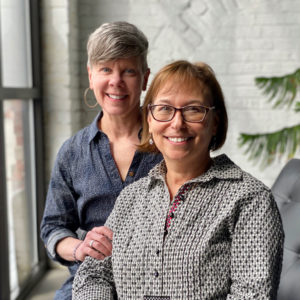 So how did Q get started?

Patty: I was freelancing, Linda and Jim were working at agencies, but they were miserable. Working 60-70 hours a week. Linda was traveling all the time and Jim was working every weekend.

Linda: Every time the three of us would go to dinner, Jim and I would be complaining the whole time. “I had to work until midnight the other night” and “so and so did this or that.” Finally Patty had enough.

Patty: I said, “All you do is complain about your jobs, and it’s horrible! This job is going to kill my husband. We should just start our own agency.” And we all just said, “…okay.”

Linda: And that’s when we started working on Q.

Patty: We worked for 6-8 months on a plan. We didn’t take any business with us when we left our jobs. We decided early on we didn’t want to do things that way, because we liked the people we worked with and worked for. And actually, they ended up giving us business.

Linda: Right, they gave us projects that were too small for them, or things that they couldn’t handle. They used us like freelancers at first.

Patty: So that was the beginning.

What was the scariest thing about starting Q?

Patty: We weren’t scared at all.

Linda: We didn’t have anything to lose! I was 29, I didn’t have kids then. The only thing I had to lose was my house.

Patty: We felt very equipped to start Q. The one thing that made me a little nervous was that everyone said, “You’re starting a business with your husband and your best friend? You’re going to end up divorced, and have to find a new best friend!” But for me, those are the two things that have made it the best. Our philosophy was always that we’d never let anything get between us.

Linda: Any big decision was a majority rule, so we were always going to compromise. People told me, “You’re going into business with a married couple? They’re going to team up on you!” But usually it didn’t happen like that.

Patty: That doesn’t mean that we didn’t disagree—or argue. Sometimes during the day it was contentious, and then Jim and I had to go home! So we made a hard-and-fast rule that once we left for the day, we didn’t talk about work.

Linda: But that was also one of our original goals and objectives when we started the business. We wanted to have a life outside of the business, so we all tried really hard not to let work take over our lives or relationships.

Patty: Yeah, starting Q wasn’t scary. But it was hard.

Linda: It was really hard.

What was the hardest part, then?

Linda: So we made this business plan, and we projected that we’d make all this money in the first year. We thought, “That’ll be easy!” and we had a list of people we were going to talk to. And we made $65,000 the first year.

Patty: We ate a lot of peanut butter.

Linda: And we didn’t take vacations for the first three years.

Patty: But the hardest thing, I think, was learning to run a company, produce the work, and lead a staff at that stage in our careers. I personally made a lot of mistakes along the way. We had to learn to run a business together.

Linda: And to build revenue. I’d never had to get new business before. That was kind of scary, actually. Not knowing where the business was going to be coming from.

Patty: But we learned, and got better, and made more connections. And now that’s the fun part for me, not knowing where the next connection is going to be coming from.

What’s changed the most since Q started in 1994?

Linda: When we started, we were right on the cusp of new technology.

Patty: Yeah, the technology changed everything. When we started, the internet was brand-new and there were no cell phones.

Linda: There were barely computers. And because of the technology, the workforce has changed too. No one has to stay at the office until midnight to get something done, they can take their work home and then send it. Whereas we were scrambling to get to Fed-Ex by 9:00 to get things overnighted.

Patty: And you can have a meeting with people in multiple locations. The whole world has changed because of technology.

Were there any times when you second-guessed your decision to start Q?

Linda: No. There were crazy times, but I don’t think we ever thought that we didn’t want to do it anymore or that we’d made a mistake.

Patty: Linda and I wanted to be in control of our careers. At the time, the industry was very male-dominated, and we could see that to move up fast in our careers was going to be a struggle.

Linda: I was the only woman in the room more times than I wasn’t. So even when things got tough, we still wanted to be in control. We also had great female role-models to look to, who were aggressive, smart, and respected.

Patty: They made us believe we could do it.

How do you think being women owners impacted Q’s trajectory?

Linda: I don’t know if it’s as much about being women, as it is about being the two women that we are. We’re collaborators.

Patty: Yes, Jim is a solid creative director, Linda is a solid account executive, and I have a good head for business. Jim was able to direct his team and manage the production, and the two of us could really focus on building the company.

Linda: We have our triangle of skills and we respect each other’s strengths.

Patty: Linda and I have an excellent line of communication. We talk constantly. We communicate how we feel, our sense of things, our intuition about it, our problems, we can vent to each other, we push each other. And I think the fact that we collaborate like that has influenced Q’s trajectory.

Linda: We would have made more money if we’d worked for someone else, but we wouldn’t have been in control of where our careers went and the measures of our success.

Patty: Having a business partner who’s there for me, that’s what matters. Helping our clients to grow, that matters. Giving people jobs, keeping the lights on, having our own lives, these are the things that mattered to us, and that’s the trajectory we set for ourselves when we started the company.